Detail of Drum Circle
18x24 inches acrylic on canvas
This week's blog is about my recently finished painting, Drum Circle. It's fairly large-ish for me, 18 x 24 inches and my intent was to show a scene with different folks interacting with each other. I also wanted to play with the full value spectrum of light and dark.

Another artistic aspect I wanted to play with was design and composition. By the time I'd firmed up the painting's composition I was working with a triangle, formed by the left hand figure's leg pointing up to the background building's yellow high light and coming down to the toddler's tippy toed feet. I also had a secondary visual “pathway” or circle of interest....hints of pure red in the drum leader's tie-dyed t-shirt, the hat with the Drum Circle sign, the toddler's drum and his drum stick, and the cup of cola in the nurse's hand. Both these visual devices or details are to guide the viewer's eye around in the painting.

I also had a ball doing subtle brush work details, like the side turn of the nurse's head with just a bit-o-glint on the sunglasses, her nose and lower lip.

I was also pleased with the free handed brushwork of the nurse's hand holding the white cola cup centered on her co-worker's white shirt. By varying the color and temperature of the different whites, I was able to show them all together yet differentiate between the different white objects.

Along with the detail of the toddler intent on beating his red drum at the top of the post, I had a blast doing different LOD or level of details on different sections of this painting. These different bits of detailing within a complex painting were a classic example of both “the devil is in the details” and the delight to be found in detailing a painting just enough to tell it's story with out over doing the level of detail.
Posted by Alison Lyne at 8:18 AM No comments:

This weeks post is a lovely “cross blog guest post”, by SCBWI Midsouth's own Randi Lynn Mrvos, the intrepid editor of the ezine Kid's ImaginationTrain and you can find her at: http://www.childrenswritersworld.blogspot.com

I love to see how children’s illustrators bring scenes and characters to life. Their choices of color and media unite with the text of a manuscript to turn a story into a book. This made me wonder about the choices the artist would make to illustrate my upcoming book Maggie and the Summer Vacation Show and Tell. I’m curious to see how the artist will capture the essence of my words.

The book contract indicated that I would have some say in the illustrations. I wasn’t sure what that detailed, but when the creative director approached me about my vision for the story I felt privileged. The best way to explain to her how I felt about the story was to show her two of my favorite picture books.

The art in Because of Thursday by Patricia Polacco and Winfred Gordon McDonald Partridge illustrated by Julie Vivas conveyed a whimsical abstract realism with a muted color palette. 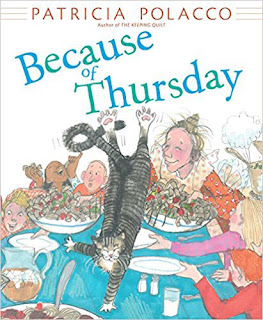 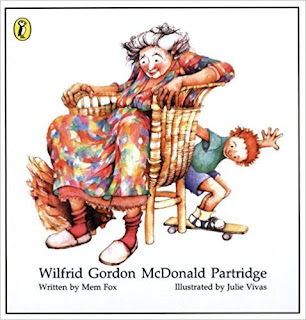 This would be a good fit for Maggie, a Charlie Brown-like character who’s down on her luck and for her rescue dog Trooper.
After sending the director my thoughts and the covers of these books, she asked three illustrators to come up with a sketch of a kid. Two were nicely drawn, but a bit cartoony.
The third artist captured the quirky characteristics of Maggie. He used a water color wash to create a curly red-haired Maggie.

Waiting to see the completed art is like wondering what your baby will look like when it’s born. I’m nervous, but excited. If the illustrations are anything like the preliminary sketch, the artist’s choices will engage young readers and get them in the mood to meet Maggie and Trooper.


To see the blog that I "cross blog posted" on Randi's blog just  go to:   http://childrenswritersworld.blogspot.com/2017/03/three-tips-to-help-your-picture-book.html

I have really enjoyed playing this "cross blog posting" game,and so appreciate Randi playing along with me!

Posted by Alison Lyne at 8:25 AM No comments:

Wooden Geode in Blue
Acrylic paints on wood with mica chips and salt
This time around I'm still painting but on an entirely different surface. A few weeks ago, Frank started on Turkey Hollow, and in the process of establishing a level base of the carving, Frank sawed off a angled bit of the billet. I saw it discarded on the saw table, and got an idea. I asked him to smooth off the bottom and sides and a top surface.

I had seen some actual gemstone geodes recently at a nature preserve gift shop, and fell in love with the glow of the colours. I had also seen some highly abstracted wooden ones on Pinterest. When I saw the discarded piece of wood on the saw table, everything came together and I decided to try making my very own wooden geode.

I brought the wooden piece inside and poured on a lotta acrylic gel medium, and actually squeegeed off the excess with a small hand held squeegee. After letting it dry for a coupla days I laid in the first of many coats of gel medium mixed with varying intensity of all the different tubes of blue acrylic paints I had on hand. On the top, I finished off with some pale blue and white for a graduated effect

While I was at it, I found an old sample that had come with a paint order, of mica chips suspended in acrylic medium. I also found some small salt crystals in an old plastic “salt grinder”. Both things found their way onto my wooden geode. I continued to cover the salt and mica chips with layers of clear acrylic medium, and the blue parts of the geode with thin layers of multiple shades of blue. As a finish Frank put some tung oil on the still exposed wood sides and bottom of the piece. It's his usual finish for his sculptures.
I finished this piece when it's sheen matched what I'd seen of the “real” rock geodes. I guess you could call this project a real “mixed media” piece......both cellulose and crystalline in it's making.

Posted by Alison Lyne at 7:11 AM No comments:

Us at the US Bank Celebration of the Arts Show

This bitty blog post is just a snapshot of the two of us at the US Bank'sCelebration of the Arts Show reception at the Kentucky Museum on Western Kentucky University's Bowling Green Campus. We both had artwork in the show, some on the bottom floor gallery and some in the upstairs gallery.

I'm pictured with “Do You Wanna Play?”, my motion paintings of our dog Bridge. Frank is standing with “String Player”

And I also had “Just Messing About” showing:

As always is the case it was fun seeing both how our works looked “out in the (show) world” and seeing all the other artists' works. Western Kentucky puts on a fabulous reception and is a pleasure to get invited and to attend.

Y'all go by the Kentucky Museum and take a look!
Posted by Alison Lyne at 2:20 PM No comments: