ArtView: MINE! illustrated by Patrice Barton and written by Shutta Crum 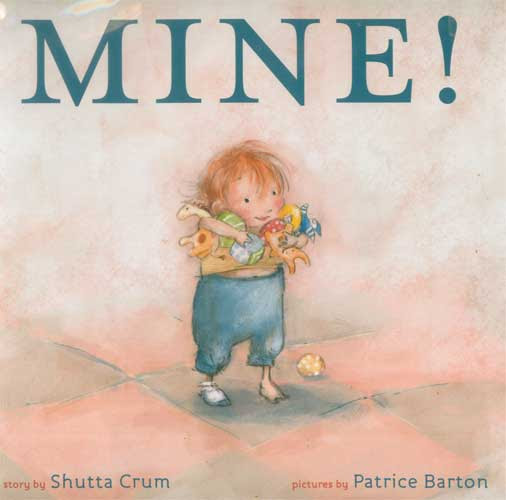 MINE! By Shutta Crum and illustrated by Patrice Barton published by Penguin Random House. Images used by permission of the publisher.

When I first picked up this almost wordless picture book, I was drawn by Patrice Barton's darling little toddler on the cover. Then I flipped thru the book, and did it again, and counted all of 9 ½ words....repetitions of “Mine!”....... and the puppy saidth “Woof!” once. I would have thought that this kind of book would have been written and illustrated by the same person.....not so! My next thought was just how would that manuscript look????

I went thru the book again and began to appreciate how Patrice Barton had taken the author's “action notes” and woven a lovely playful swooping story of how a toddler proclaims everything is hers......while a giggling, crawling sibling looks on.....and a puppy plots to grab some of the fun for himself! After much grabbing, giggling, splashing, we come to the “punch line”.....er.....word, which is.....you guessed it: MINE! The picture has the giggling, “just taking his first step”, sibling pouncing on the toddler and announcing that she belongs to him! (I'm arbitrarily assigning him/her to the engaging toddlers.....it could go either way) 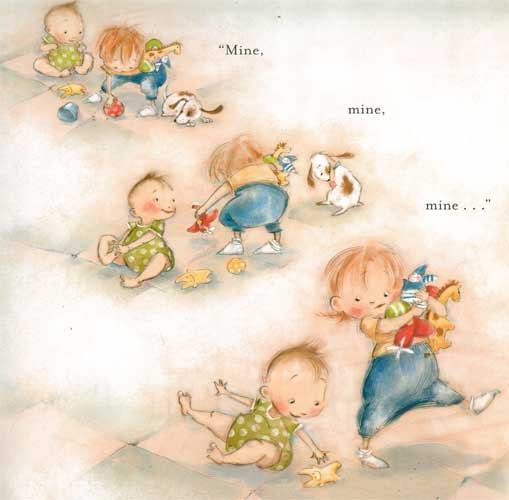 Patrice Barton's gestural drawings are fantastic....she captures the fluid motions of little ones giggling, solemn watching, then going single mindedly for whatever catches their attention. I've loved Patrice's expressive faces ever since Rosie Sprout's Day to Shine.....and she catches these two little one's glee and giggles with brite eyes and smiles that show every little thought in their quick silver minds. From their poofs of angel fine hair to baggie jumpers the black “pencil” strokes just barely contain these little ones. With what looks like soft pastels colour in the toddlers' faces....there is a blush on every cheek....that really helps round out the little faces. The soft surrounding colours of the floor give this such a sense of safe, soft, giggling fun. 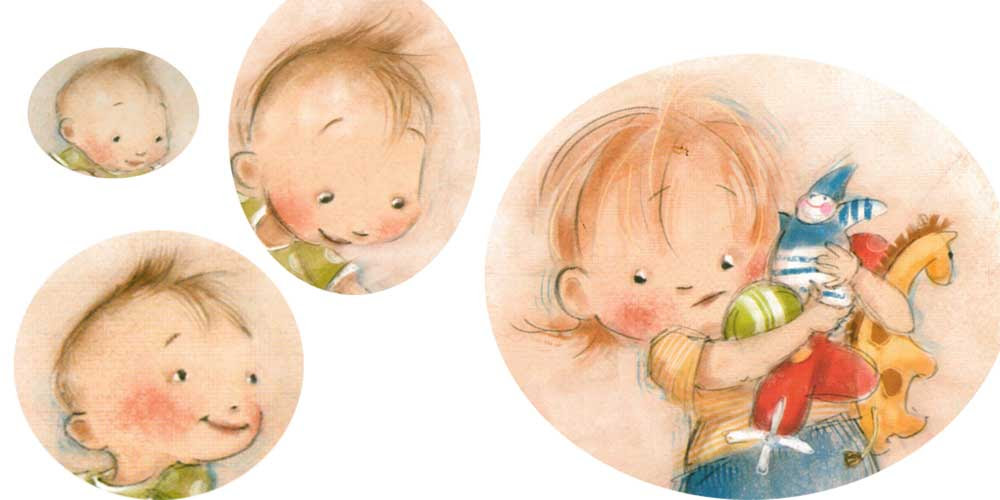 This is such a lovely blending of the author's intent and the visual creativity of the illustrator. It's like they were both “on the same page” in telling this story. The action swoops, and giggles and bounces around.....and only uses 9 ½ words!

Here is a link to Shutta Crum's webpage on MINE! with a darling book trailer and a video featuring Patrice Barton. 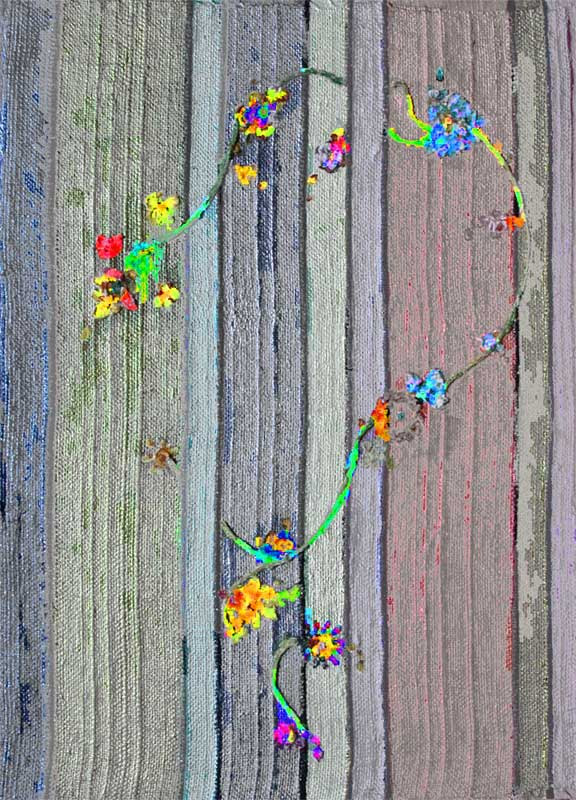 Figure out the answer to the riddle and you'll learn a bit more about PBs today.  Every time you click on a cover or read a review, or even flip thru a PB in the bookstore, you add a bit more to your knowledge base, which can help you to figure out just where YOU could fit into the current publishing scene.  Whenever I see a neat book (PB or otherwise) at a bookstore......I can almost bet it'll be in my library ASAP.....usually without me even asking for it!  And those few I do ask for.....they gets them.  Your local library is an excellent place to start researching the PB industry.
I'll post the answer to the riddle tomorrow!

Name that PBP:
I've answered three Russian questions, and with Stillwater have considered the zen of shorts,ties and ghosts.  I let watercolor flow thru my stories, both in black and white strokes, and purpled shadowed colour, with plenty of white space for balance.  My AD is Saylor with a  press as wide as the blue sky.  Who am I??

The answer to riddle #2 is Jon Muth.  He both illustrates other's stories and writes and illustrates his own.  The books of his that I first saw were Zen Shorts, Zen Ties and lately Zen Ghosts.  All of them feature his whimsical Stillwater, a zen fable spouting, panda bear.  He lets Stillwater tell little fables (in oriental style, black ink brushwork) illustrating some basic zen concepts.  He manages to infuse a huge black and white playful panda bear with wonderful color, and lets him cast beautiful shadows that connect the different parts of a scene.  His watercolors are a lovely mix of realistic light and shadow, and  beautifully designed images with lots of  white negative space. His publisher is Blue Sky Press, an imprint of Scholastic, with David Saylor as his Art Director.

Here's a link to one of his bios:  http://www.scholastic.com/teachers/contributor/jon-j-muth

Posted by Alison Lyne at 8:13 AM No comments: 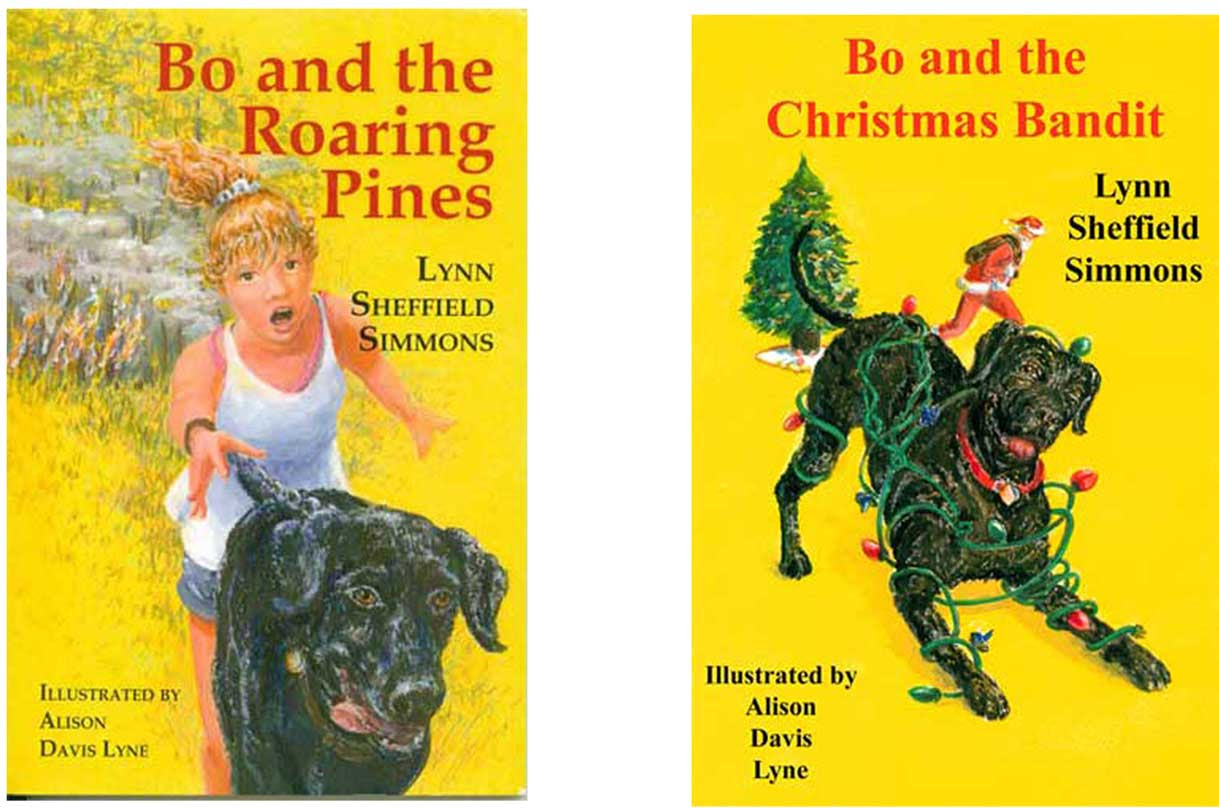 Visual branding is a valuable tool that shouldn't be under-estimated in today's “battle for consumers' eyes” and dollars.
Posted by Alison Lyne at 1:03 PM No comments:

LITTLE THINGS AREN'T LITTLE WHEN YOU'RE LITTLE--Hot off the press!

Lookee what just arrived on my doorstep.......first copies of Little Things Aren't Little When You're Little.  I couldn't be more excited and pleased at how it turned out! 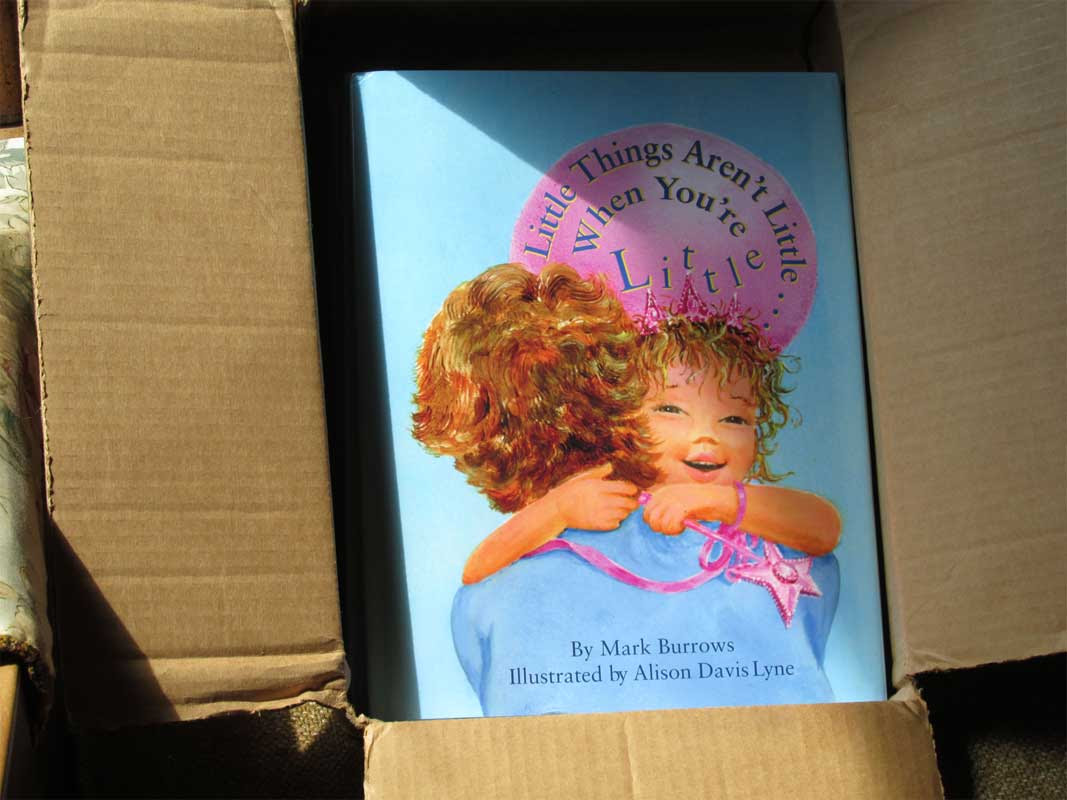 To see more about the book check out this previous post
http://lyneartblog.blogspot.com/2013/06/my-next-big-thing-little-things-arent.html
Posted by Alison Lyne at 1:14 PM No comments: