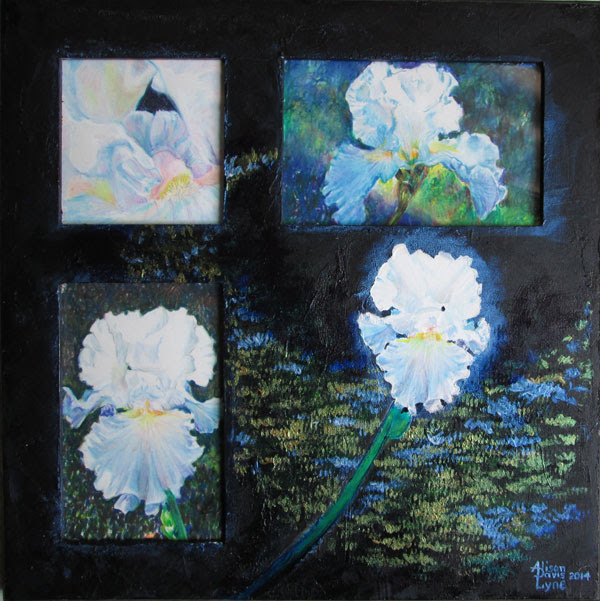 Iris x 4
colored pencils on bristol (under glass)
and acrylic paints on the frame.
My reference photos

What starts out with: 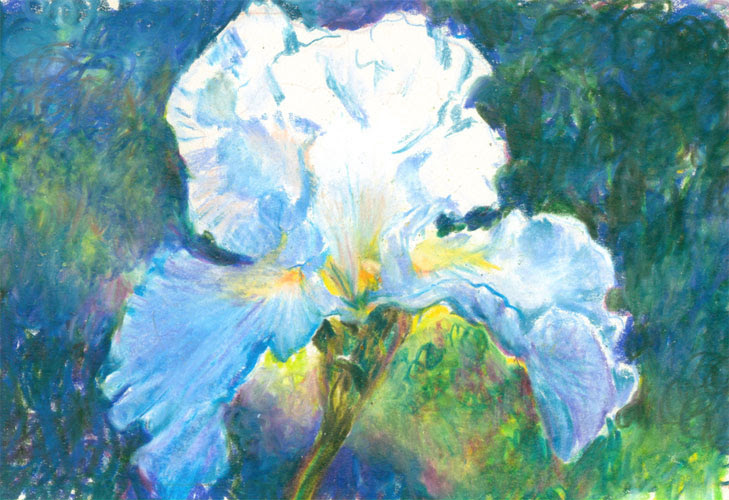 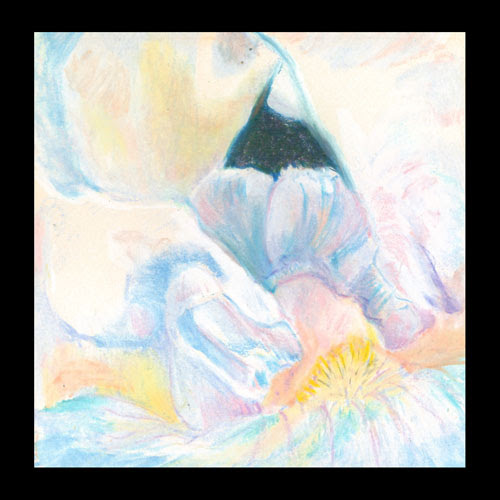 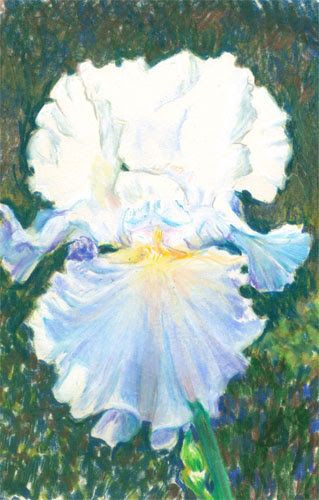 I Gots a Brand New Toy or DOTZ! 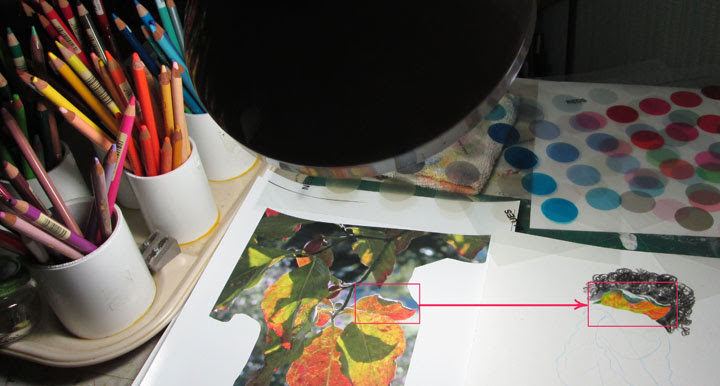 I just got an order from Ann Kullberg's website http://AnnKullberg.com and it's a lovely Color DOTZ System-Color Choice Tool that was designed by Kathee Nelson. The “system” is actually 5 pages of transparent acetate with a host of 1 inch diameter transparent dots. They are arranged in groups of blues, greens, yellows, reds and black gradients. Since I paint/draw or w/c with transparent glazes......I couldn't wait to try this system out.

So I began with one of the green/gold/orangy leaves. I drew and colored it in, then began work on a graded background of heavier and lighter black scribbles. I needed the background values in place to see if my leaf looked right. I had to “reserve” a teensy white outline to show the backlit halo. Now onto colour.....

I first tried a bluish DOTZ circle.....nope! Then I tried a bluish purplish circle.....better. (Colour theory sez that an opposite color on the color wheel will get you the best “pop” of two colors side by side.) 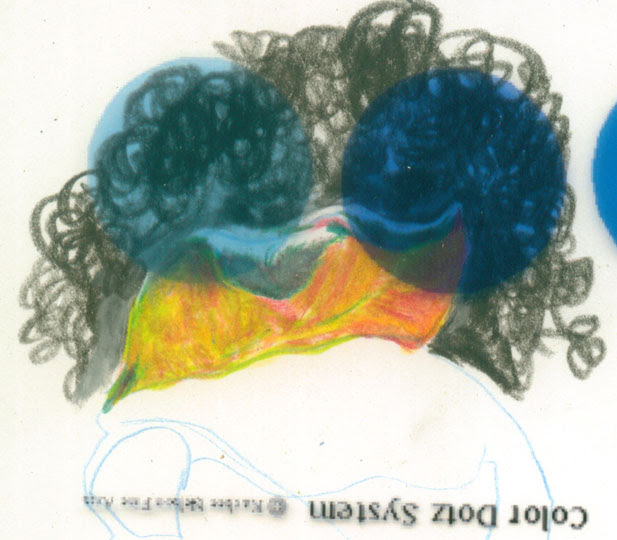 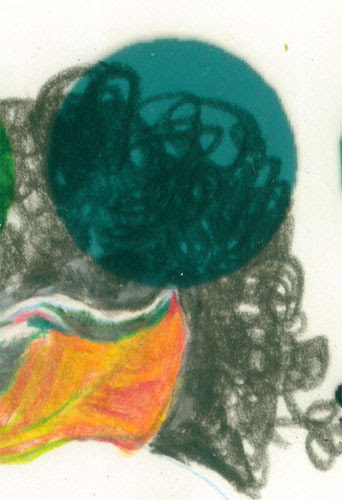 So the blue purplish dot it was. I then had to figure out the colored pencils I needed to blend to get as close of a match as I could. I laid the color DOTZ sheet over my colored pencil drawn test circle to see how close I'd gotten. Do keep in mind that.......DOTZs are pigment on acetate sheets.....which I've photographed then imported into a computer screen (LED lights on a computer screen). If you in turn printed the picture out.....that would be ink pigments printed onto paper. Whew! It's no wonder we artists talk about a “close” and not an “exact” match when talking colors.

And finally I went back to my drawing and worked a dot of the correct color over the black background scribbles......and blended things in. I laid the color DOTZ transparent sheet over my drawing to check and see if I'd gotten the color match correct.

I luv this idea. And I'm already planning how I can use this in watercolors and in acrylic painting. I think I can make up some of my own DOTZs by painting acrylic dots on my own acetate sheets. It would let me know what some of my favorite acrylic colours would look like. It would also give me a quick reference as to which DOTZs closest correspond to my acrylic paint pigments.

I see more charts in my future! 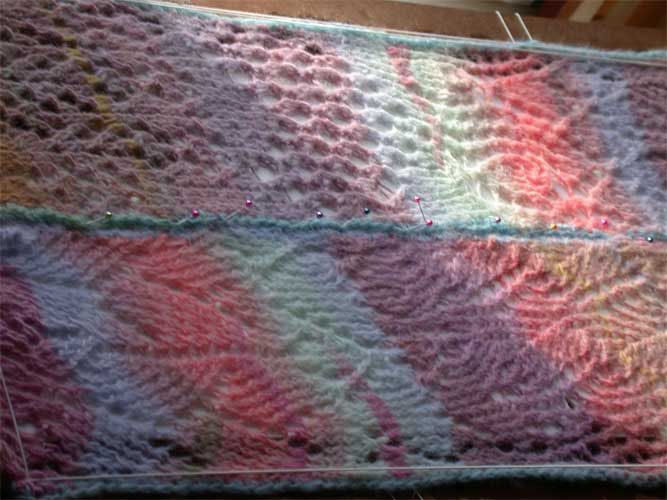 A while back I finished a knitting project.....a knitted lace sampler scarf.

At the time I did what all good little knitters are supposed to do, I wet blocked the scarf and it looked pretty good. As I began to wear it, the selvages began to “roll under with wear”, as you can see from the right hand section of the scarf. 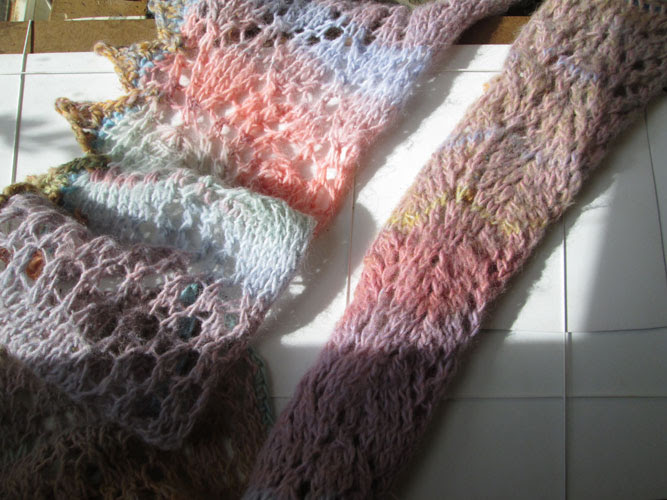 Grrr!......this hid all my hard work on knitting the fun lace patterns.....well, shoot!

So recently I added onto one selvage a simple crocheted edging in a slightly heavier wool two ply. The scarf was from a LionBrand singles yarn. I began to wet block it for the second time. 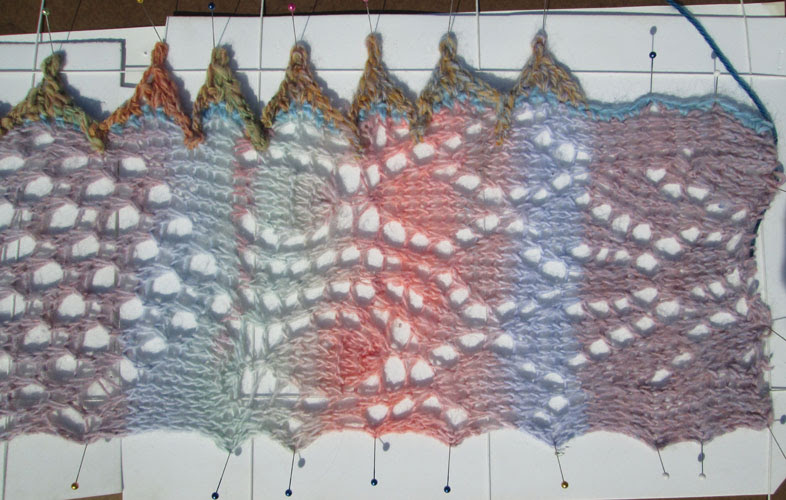 I found the longest piece of masonite I had and began to stretch and pin the loooooong scarf....... 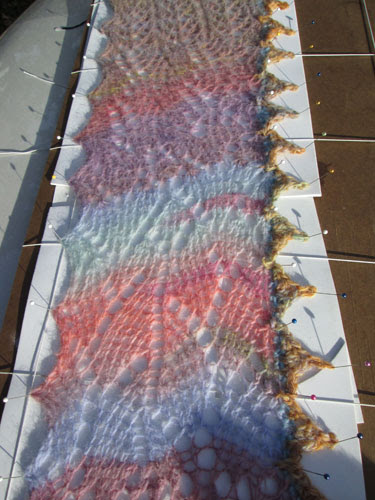 After I finished the first half, I compared the re-blocked side with the single blocked side.....and found I'd gained 2 or 3 inches, just by re-blocking. Now lets see if the added border and re-blocking will work better, when I pull the ends together for an infinity scarf. 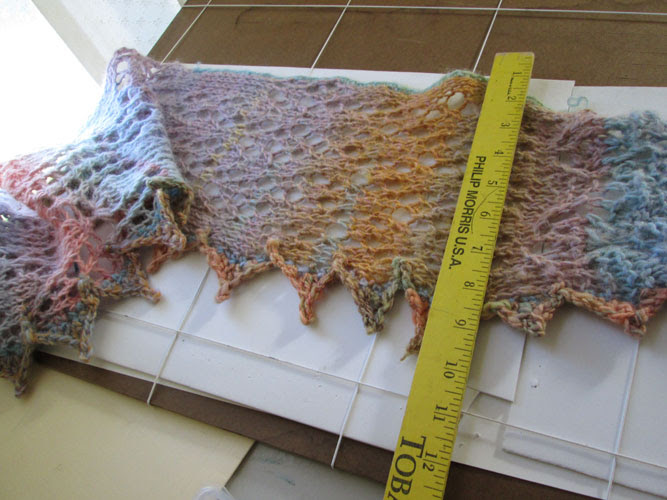 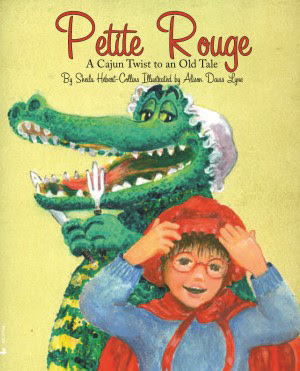 PETITE ROUGE A Cajun Twist to an Old Tale

This is a post about character development in my most recent picture book, Petite Rouge: A Cajun Twist to an Old Tale, Pelican Publishing 2015.

I was tagged for this Blog Tour by the lovely and gracious Christine Mix. Check out her blog tour post, about her picture book character “Spike” at:
http://chrismixillustrator.blogspot.com

The first question in this installment of the “Meet My Character” blog tour:

What is the name of your character?
The character's name, Petite Rouge is French/Cajun for “Little Red”.....or Little Red Riding Hood. Tackling such an old fairy tale, that has been done so MANY times before, was a bit daunting.

When and where is the story set?
In Sheila Hebert-Collins' retelling, even tho' the woods was traded for a swamp (Cajun = Louisiana = swamps) and the wolf traded for a gator and the time is “today”.....the basic story was about the same. 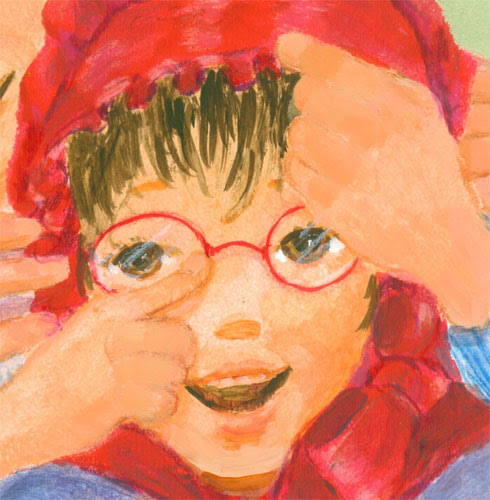 What should we know about her?
Each time I'd read the story, I was struck by the same thing; Little Red Riding Hood, a perfectly “normal” looking little girl, ALWAYS failed to 1) recognize that the wolf in the woods was the one her mama had warned her about and 2) realize that the “grandmama” in the bed, was NOT her grandmama......and I'm going “Wait....what???”
I know the point is to get the little reader to start saying.....”Watch out Little Red Riding Hood”.....and “know” something that the main character doesn't seem to pick up on.....but seriously???
So in my version, I gave an explanation that makes sense to me. Little Red Riding Hood or Petite Rouge is near sighted, and wears glasses. The villain steals her glasses rendering her incapable of seeing that he had taken her grandmama's or grandmere's place.
Now this was something I could work with.

What challenges did you have in telling the story?
Shelia Hebert-Collins gave me a wealth of scenes and dialog to work with in telling Petite Rouge's story. But to add in my bit-o-verve in the story, I picked up on one line that told of Petite Rouge taking a small boat thru the swamp to get to her grandmere's house. During that boat ride, the evil gator BUMPS the boat and knocks Petite Rouge's red glasses off her nose....... 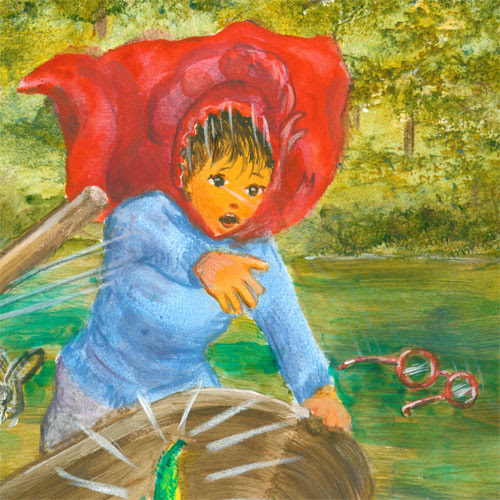 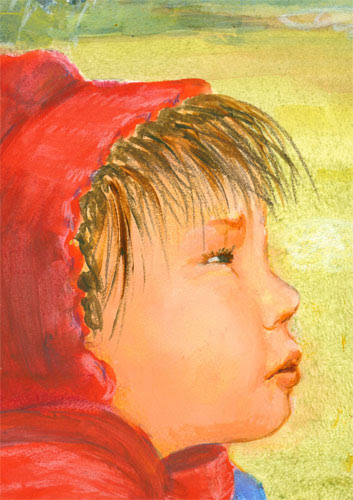 rendering her only able to squint to try and see who she is really talking to.

What goals did you set for yourself in telling this story?
My main task was to tell the story as written by Shelia Hebert-Collins adding my own bits of (color) spice to the mix. One of the first things I found I could use was the actual color play of the RED cloak and hood ( garde-soliel or sun bonnet) that Petite Rouge always wears, against the intense GREEN of the evil gator. 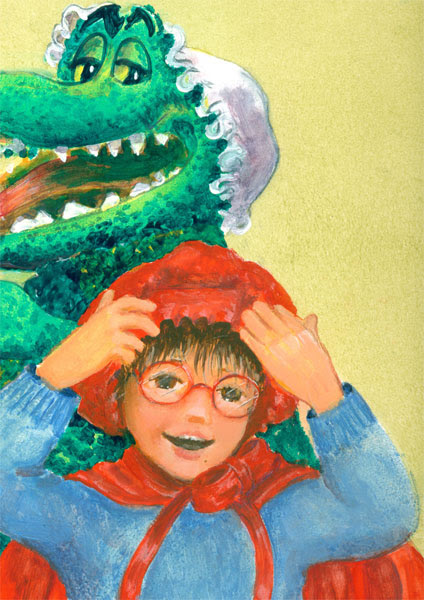 I intentionally lowered the chroma (color intensity) of the background swamp/house interiors to allow the eye to go directly to the very very RED of Petite Rouge's clothing and the virulent evil GREEN (Phthalo green glaze over a arylide yellow underpainting )of the wicked gator. Secondly I found that I could emphasize the fact that Petite Rouge wore glasses by making them red. I had both her mother and grand mother also wearing red glasses, since near sightedness often runs in even fictional families.

had been in a sketch done years ago, and found their way into the book. They are pivotal at the end of the story where they........oops! No spoilers! You'll just have to get the book to see how Petite Rouge gets on.

And now onto the next in line for the Meet My Character Blog Tour here......
my Midsouth SCBWI friend, the totally: “Fabulous Illustrator” Mary Uhles:


Mary Reaves Uhles has created illustrations for clients such as Cricket Magazine Group, McGraw Hill, Magic Wagon Press, and Thomas Nelson. She is currently working on THE LITTLE KIDS TABLE, a picture book for Sleeping Bear Press, available in the Fall of 2015. Previously she illustrated BEYOND THE GRAVE, a chapter book in the Up2U Adventure series from ABDO Publishing. She has twice been awarded the Grand Prize for Illustration from the SCBWI Midsouth Conference. Her piece, Eat, was a finalist in the 2014 SCBWI Bologna Book Fair. Prior to beginning her career as a freelance illustrator, Mary worked as an animator on projects for Warner Brothers and Fisher-Price Interactive. A PAL member of the Society of Children's Book Writers and Illustrators, Mary lives with her family in Nashville, Tennessee. Since creating characters and stories is her favorite thing in the world (even more than mocha fudge ice cream) she feels mighty lucky to do it every day in her hilltop studio. 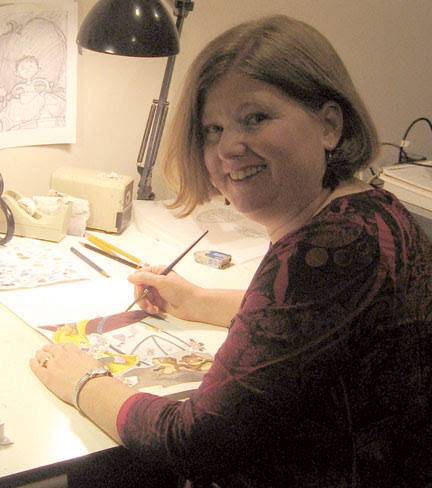