ART VIEW-Art Centered Picture Book Reviews-When No One is Watching illustrated by David A. Johnson written by Eileen Spinelli

Less color is more AND is very appealing. 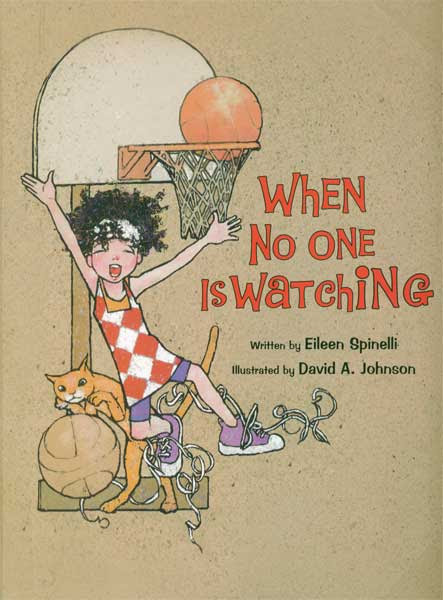 I picked up When No One is Watching at my local library just 'cause I found the main character on the cover very appealing. When I read thru the book's lovely text by Eileen Spinelli I was delighted to see how David A Johnson had picked up on her lyrical text and runnnnnnn with it.

The story has a shy mop-haired little girl narrating how she alternates between her energetic activities when she's alone “when no one is watching” (running, jumping, singing, dancing etc.) and when she's with others...she's a shy wallflower with family, classmates, and playing on the playground. In both situations David Johnson makes sure you focus on her, by giving her the most intense colour with everyone else being “sotto voice” in grayed colors. The only background objects are just the necessary props....a chair, bed, ball and a cat. All the focus is on the shy narrator. 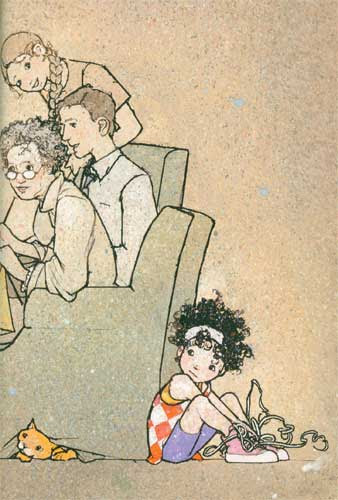 The characters look like they are drawn in pen and ink on a spattered mottled warm grayish toned textured board. The outlines are a very expressive thick/thin black outline. There are just a few highlights on the shy little girl's face with her clothes being the brightest opaque colors on the page....I am totally in love with the small patch of pink with a white highlight that David Johnson puts on the little mop haired girl's face!

David Johnson's drawings are SO appealing, and he does so much with his character designs. He is equally “spot on” with expressions and movements. Of course his expertise in picture book drawing comes from a stellar background in editorial and portrait work. I definitely want to study David Johnson's ability to draw his characters half way between realistic and cartoon that allow for both an appealing yet deceptively simple rendering. His color intensity variations between the main character and the backgrounds, makes his storytelling a tour de force of COLOR stage direction.

There is also a cool book trailer here.

Images reproduced by permission of the publisher; all rights reserved

Visual Art Tip: Pinball Machine Effect; One Person has an idea who tells another person.....

PinBall Machine Effect: One person has an idea, who tells it to another person, who takes it, and changes it and comes up with another idea, and "bounces" it on to someone else.
This visual art tip is the result of a verbal/visual "pin ball machine" effect. Some while back I'd posted a verbal art tip on the usefulness of combining media, in this case acrylic glazes and watercolor. A few months later I got an email from Connie McLennan that read in part:
I did just have a revelation triggered by reading the word "glazing" in your recent tips thread, though! I have been struggling with creating flow-y blobs that look like ink dispersing in water, which are also permanent enough to allow me to paint the color of the water around them. Have been experimenting with watercolor and dyes, and was planning to spray them with workable fixative before overpainting -- before I read your thread and realized/remembered I could do exactly what I needed to do using thinned acrylics for the flowing blob colors, letting them dry, and painting the color of the water around them (hand slapping forehead.)
Which of course pleased me no end!
The subject that Connie McLennan was painting were pages for her book Octavia Octopus and her Purple Ink Cloud Sylvan Dell Publishing ISBN 0-9764943-5-3 April 2006. This is the title page showing the floating ink blobs that the book's heroine, Octavia, had made. It shows Connie's success in keeping the coloured "ink blobs" separate, and not mixing and dulling the rainbow effect, and keeping them "in the water", but not mixing with the blues. 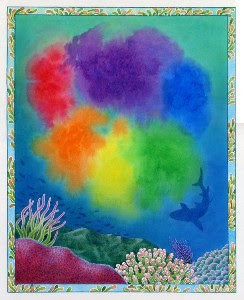 Connie was kind enough to allow me to use her images that show the use of her version of this "art tip" on keeping the flowing feeling of the "ink colors" while surrounding it with water,and not have the two mix. She also said about the pages below:

"It was particularly important that the edges of the orange-yellow-red colors not mix with the (opposite) blue color of the water." 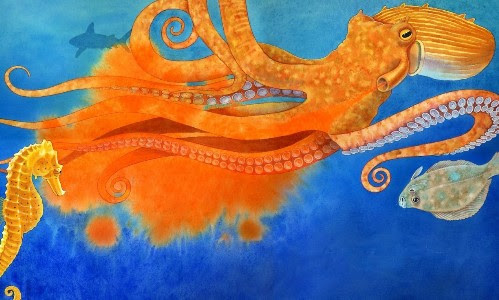