Garden Party-Chairs...or How I got out of a Compositional Corner

This week's painting was a “twice-finished” painting. I “thought” I'd finished this painting last year.....but after a while of walking past it again and again I felt that I hadn't quite finished it. Here's what it looked like: 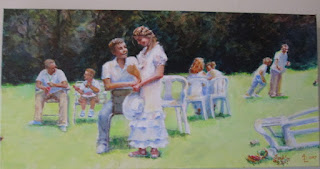 As you can see most of the main elements of the painting have been done, but it somehow lacked cohesion. This is one of those paintings that I started out thinking I had a plan.....but really didn't. I wanted the story in the painting to “read” left to right.....just like you read a book. The composition was horizontal, to fit with the shape of the canvas. But there were gaps in the flow of the action.

So I went back to one of my painting technique books, and found a solution. A lot of paintings' composition can be roughly compared to letters in the alphabet. Some paintings have a “C” type of composition, others more like a “L”.....and I decided that my painting needed to be shaped more like a “T”. To that end, I added in more chairs to the center of the painting, to lead the eye into the painting.
I added another small figure in the background to help balance the new larger female figure looking off to the right. I also added a small poochie running after the little rascal that caused the boy to upend his chair along with his hamburger. Both these characters are being egged on in the chase, by their dad who is laughing.......
This doesn't seem to bother the young courting couple in the center left...... 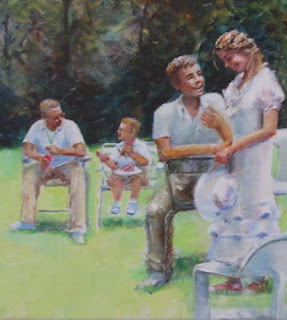 or the father and son (in matching outfits and red glasses) on the far left. They don't seem to be bothered by the uproar at all, if the little boy with his two hot dogs and huge piece of cake is any judge.

And if this isn't enough....I added a bit of whimsy on either end of the gallery wrapped canvas.
On the right side I have the little girl scampering away, giggling, after she goosed the boy and made him overturn his chair and chase her. 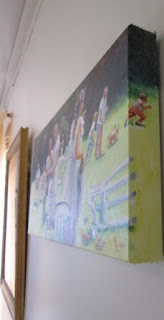 While on the left hand side I added a puppy licking his chops eyeing the dropped hamburger, while he plots how best to steal it. 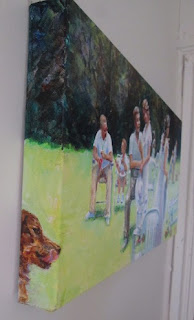 Sometimes too much in a painting can add up to being just enough!
Posted by Alison Lyne at 2:55 PM No comments:

Before the March – Clarksville Suffragists 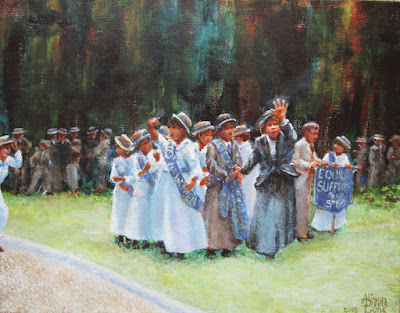 This blog post is starting off an occasional series of paintings featuring my take on the local suffragist movement to pass the 19th Amendment granting women the right to vote. I want to highlight local women's contribution to that cause. In researching the suffragist movement, I found a lovely photo on the Clarksville Arts and Heritage website..... 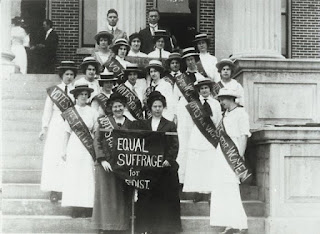 Seeing all the lovely young ladies in white, being shepherded by two women leaders in dark suits and bowler hats......I couldn't help but wonder what the scene might have looked like as they were gathering together before their march. I love imagining what might have happened before/after a photograph was taken.

So I began to design a composition..... 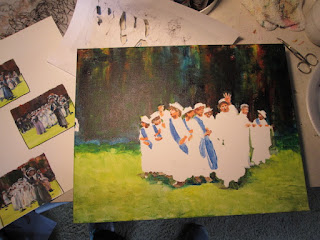 I settled on a sunlit bit of grass for the suffragists to gather together into their march formation. I really wanted to highlight the young ladies white dresses and straw hats or “boaters” against the contrast of the shadowed trees. I also wanted to add in, in the background, a few male onlookers scoffing at the gathering. The symbolism of the gentlemen in dark suits and hats, lurking in the shadows of the trees against the white of the sunlit young women's dresses was a compositional perk not to be wasted. I also liked the “messaging” of the two march leaders.....dressed in “serious” dark dresses and suit coats with the “take charge” bowler hats....usually only worn by men. I did want to note that there was in the photograph, a couple of men in the group....whether sweethearts, brothers, or “suffra-gents”. To add this note, I added one young gentleman talking to the standard bearer on the right. 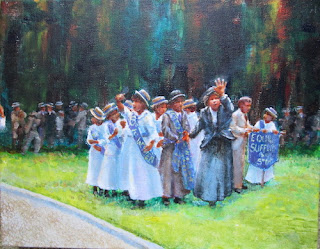 Here I've gotten the composition firmed up and gotten the basic colours set in. I had added in some white marking a curb......as a design feature. I wanted to draw attention to the urban setting for the march and as visual “pointer” to an out of sight young lady rushing to join her friends in the group. In the finished version I put the young lady running towards the group in the main front view to connect the curb and the background hecklers. This is done on a deep gallery wrapped canvas.....so she is finished out “around the corner” so to speak. 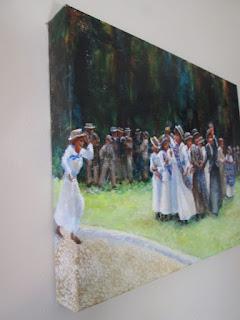 I've had a blast painting this subject, and even more fun researching the stories about this movement.
Posted by Alison Lyne at 2:59 PM No comments:

2018 US Bank Celebration of the Arts Open Art Exhibition 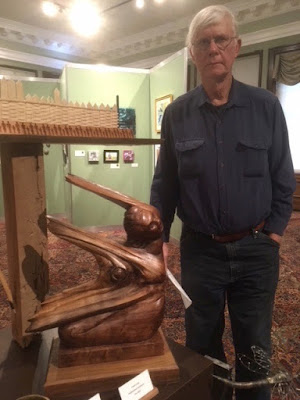 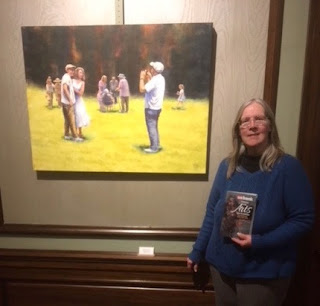 This is a bitty-bitty blog post just to let ya'll know about the 2018 US Bank Celebration of the Arts Open Art Exhibition, at the Kentucky Museum March 3-April 7- Monday thru Saturday 9-4 in Bowling Green Kentucky.

We got to visit the art show last week and took our annual photos of our artwork at the show. Frank and I both had two pieces of artwork in the show. We did have to search through over 400 other pieces of artwork displayed in five different parts of the Museum! I believe that that is a record number of entries for this show......it keeps growing each year.

There were artwork pieces of every kind of description.....anything from a group of kids (of the young goat variety) escaping their leash to ceramic castles with fully furnished interiors! So many artists with such a variety of artistic visions.

Frank had his Teacher and Firebird displayed in two different rooms. I've linked to my blog posts for each sculpture. I had Garden Party and a new piece called Music Hall.