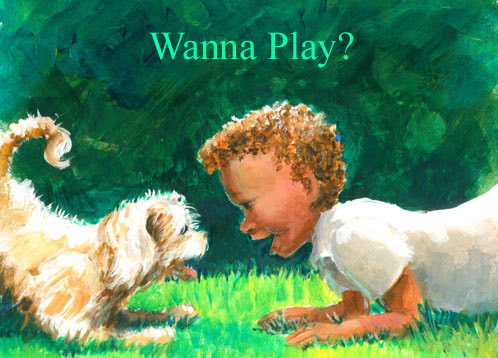 This time around I'm showing a bitty illustration called “Wanna Play”? It came from an idea I've been messing around with for a story line about a “boy and his puppy”. I've been working on visual communication between characters, and I thought it would be cute to show the puppy and little boy “communicating” using a puppy's “play” crouch signal. When you see a dog or puppy doing this crouch.....you just know that he's saying “Do you wanna play with me”?

Before I drew the entire scene, I needed to firm up the little boy character a bit. So's I did a few head sketches to see just how I wanted the little boy to look. I'm still working on the whole “keep it simple” thing......but I've found that if I use paint to “sketch” the characters and remain focused on establishing the masses of the characters, I get the feeling/gestures quicker.

I took what I learned from the sketches, and drew a simplified little boy mirroring the puppy's play pose, using the green hedge to show the bow to the backs of both the puppy and the little boy's. Even without a lotta detailing......I wanted to let the poses of the puppy and little boy “speak for themselves”. But tho' I liked the left hand version of the little boy......it was still a bit too “realistic” for what I had in mind. So's I tried a younger version, but it still didn't quite suit either. 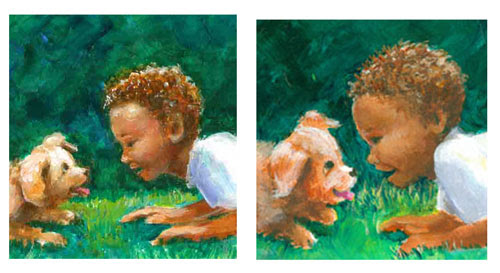 So's it was back to the “painting” board. I tried another version, this time changing the crop from landscape to portrait. I worked on keeping my “realistic” habits in check and concentrated on keeping things simple. I wanted to show the most important part of this scene......the interaction between the two characters. 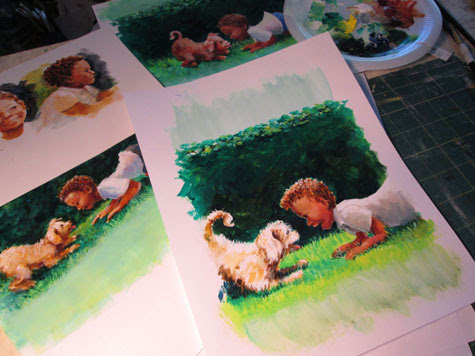 I really enjoyed putting a lotta energy in the background bushes, with bold strokes of colour. This emphasized the simpler foreground figures with their warm colors and graduated modeling. 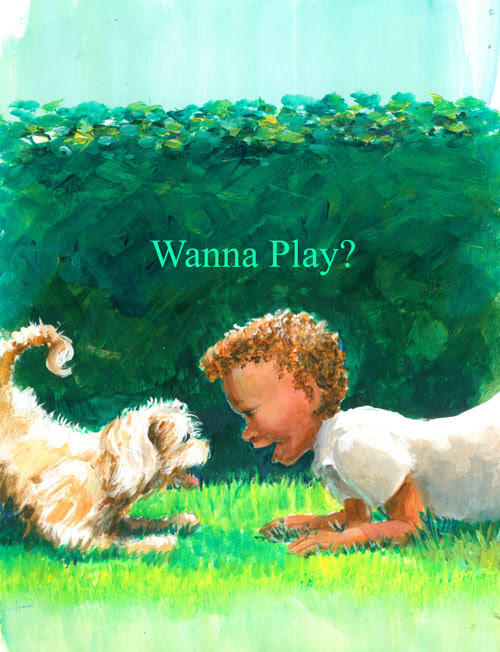