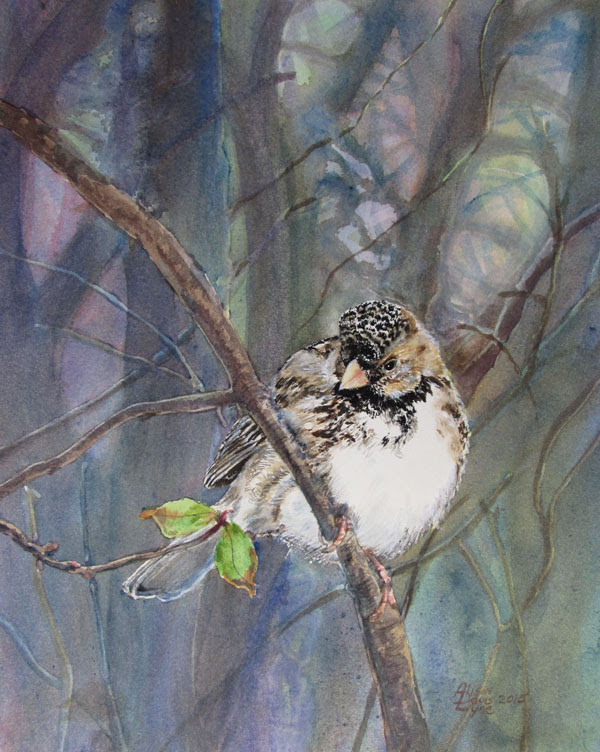 I'd like to welcome my guest blogger, Frank Lyne. Besides being my wonderful husband, he is a talented sculptor, photographer and birder. For the past few months we have “hosted” a rare, for Kentucky, Harris sparrow. Frank has documented our avian visitor from winter thru spring. Here is his own round up of our guest, Jeeves, http://www.lyneart.com/THOUGHTS.HTM
I just had to paint “Jeeves” using watercolours and one of Frank's gorgeous photos as source. Here is his blog post about the photo I used for this watercolor painting.

Each year I leave one hayfield uncut in the fall. In different years, my uncut hayfield has attracted a Sedge Wren, Marsh Wren and Leconte's Sparrow long enough for photos but not long enough for others to see them. Savannah and Swamp Sparrows often spend whole winters in my hayfield. White-crowned and White-throated Sparrows were spending winters here even before I began managing my hayfield the way I do now, but I think I have more of them than I used to. This winter I found another sparrow keeping company with the White-crowned Sparrows along my hayfield border – a Harris's Sparrow. Harris's Sparrows breed in the most northern reaches of Canada, where boreal forest transitions into tundra. Most of them winter in the central Great Plains, but for unknown reasons, a handful show up both east and west of their main wintering grounds. Our Harris's Sparrow was among this handful. With only a half dozen or so other Harris's Sparrows known through ebird reports to be wintering east of the Mississippi, combined with Harris's Sparrows' tendency to stay in one locale all winter and willingness to come to food offerings, our Harris's Sparrow soon became something of a celebrity. We named it Jeeves and by the end of winter had visitors from throughout Kentucky and Tennessee, plus a few from Ohio, Indiana and one couple from Katy, Texas. The Texans came from the heart of normal Harris's Sparrow winter territory, so I couldn't help but ask if they had already seen one. Of course they had, but not in Kentucky.
As winter progressed, I kept trying to lure Jeeves in closer for better photos. Nothing worked until it snowed. When it snowed, flocks of blackbirds showed up and quickly gobbled up all the cracked corn and sunflower seeds I put out for Jeeves in the hayfield corner. Jeeves responded by showing up at the yard feeder. I soon quit putting out food in the hayfield and attempted to guard the yard feeder from the blackbirds. While snow was on the ground, the feeder regulars let me sit within a few paces and the blackbirds couldn't all be held back. That's when I got my glamor shot of Jeeves. One snowy day he sat nearly motionless for a minute or more on a flowering quince twig, plotting how to work his way around all his competitors at the food rocks. Once on the food rocks he's constantly in motion – pecking, scratching or running back and forth to the best spots.
I have gotten a few other pictures ( https://www.flickr.com/photos/123438032@N04/?)
since then to document his change into summer plumage ahead of his upcoming journey to Canada, but I'm never going to beat Jeeves glamor shot ( https://www.flickr.com/photos/123438032@N04/16594714392/ ).