Damselfly in Distress.....Colored Pencil, Ink and daubs of Acrylic 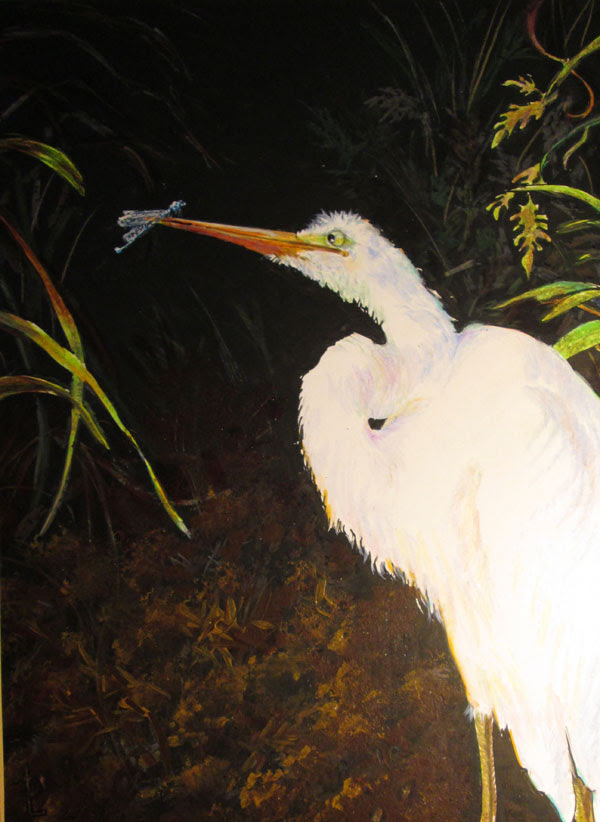 This piece is another experiment in mixing media. Frank had taken a dramatically lit photo of an Egret that stopped by our pond this summer. The camera captured the totally white Egret against a background of the very dark muddy brown pond dike bank, but struggled a bit to encompass the two extremes. I thought it was an excellent time to try to work again with using coloured pencils over a black india ink base. 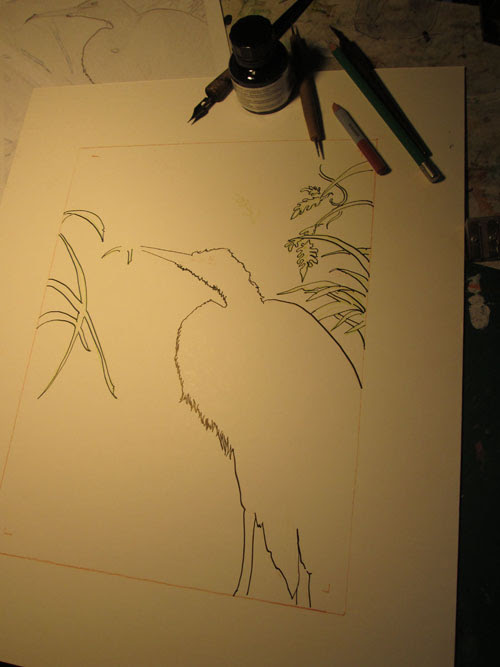 I sketched out the egret and a few leaves in black india ink. Then the fun began! 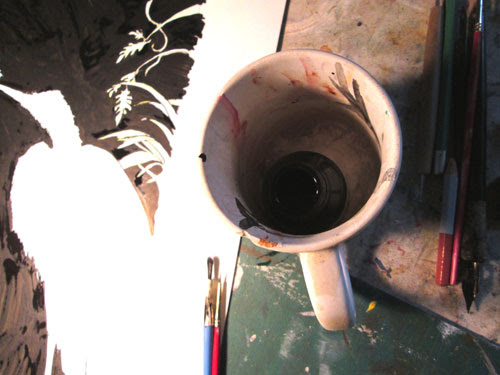 Taking an old cheap brush, I laid in black india ink all over the background. I tried to brush the ink on with broad swoops of ink, leaving a bit of the white board to gleam thru......to show movement of the background grasses, ever so faintly. I very carefully drew, negative style, around my already inked outlines. For this part I used an ancient speedball quill pen. As any of y'all who have inked in graphic novel kinda work knows......it really takes concentration to ink in ONLY the spots you want black.....and leave everything else alone.

Another habit leftover from when I did lotsa black and white work......I keep my bitty bottle of india ink deep inside a stable mug. And ask me why I do this???? 'Cause gravity + slightly inclined drawing table + open bottle of ink = very interesting “Rorschach test” spots all over the floor, my drawing and myself. Lesson learned! 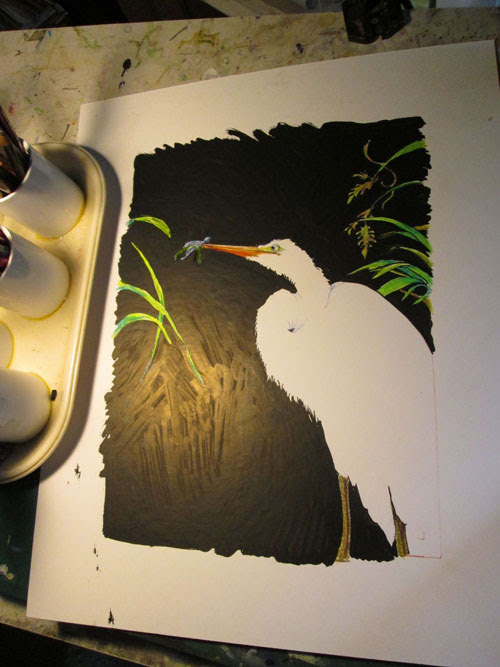 Now we get to the good parts. I started laying in the brite green base of the foreground grasses, and the eye and beak of the egret. I first drew in the damselfly “in distress” sitting on a piece of grass the the egret had grabbed. But I later decided that the green grass was too distracting, visually, and did away with it. After verifying that the size ratio of the damsel fly vs the egret was about OK, I finished detailing the iridescence of the damsel fly's wings and body and gave it a gloss of iridescent paint.

I next worked on the muddy pond bank with a combination of colored pencil strokes and scrubs. The colored pencils were also used on the background grasses and leaves. I really liked how the difference of the coloured pencils on the black color absorbing ink contrasted with the coloured pencils on the reserved whites of the foreground grasses. A good case of using what I'd discovered in a previous piece to get just the effect I wanted on this one. I finished off the mud with a light bit of sponging (using a sea sponge with a bit of mud coloured acrylic paints) to abstractly detail the mud clumps at the pond's edge.

I then gave the egret a good working over......with very light pencil shading with pastel coloured “shadows”. I wanted to showcase the twists and turns of his verrrrrry looooog neck and fluffy feathers.....but keep the “glow” from the bright afternoon sunlight. I finished up using some slightly duller greens over the foreground grasses to keep them a design element....and not competition for the main character.....the egret.

I really liked experimenting with this technique. I feel that this technique lends itself better for gallery work than for illustration. The extreme value contrasts that makes it exciting when viewed “on person” in good lighting, might work against the piece if not scanned in correctly. Digital software can only do so much to contain a really big value difference in this piece of art.